When in Doubt, Use the Grenades

Blame it all on Jack Elmy.

Jack -- the Steve Jackson Games staffer behind all those design improvements of the last few years and the www.comicbooklife.com site -- holds a diehard loyalty to the Mac. (Me, personally, I swing either way, but have been going steady with a G3 for a while now.)

That means that for every 50 computer games that the Wintel-enabled fan looks over, Jack looks over one. Very carefully. In the middle of last year, Jack mentioned Bungie's hotly anticipated Myth II: Soulblighter, reeling off a long list of technical features that its advertising promised.

I added my own brand of computer savviness to the conversation. "The box for the first one looked cool," said I. He already had hooked me with "head-to-head network play," so come the holiday season and Myth II's release I picked up two copies as gifts (Merry Christmas to me).

Each of us found it very impressive, for substantially different reasons. While Jack mastered the intricacies of the game play, I tinkered through the first four or five adventures, then fired up the "tag editor" program, Fear.

Wow. No loathing here. Spread out in front of me was the most complex and potential-laden character-generation, adventure-gaming, and physics-altering engine this side of GURPS. While Jack was mastering how to flambť scores of Thralls with one arrow-riddled Dwarf, I crawled around in the guts of the game engine and figured out exactly how much damage that Dwarf's grenades did over just how wide an area.

After a while, we each came up for air and compared notes. This game was cool for a variety of reasons, not the least of which was something Myth II didn't really mean to be: a sort of gateway between GURPS-like tabletop roleplaying and the faster, louder computer version.

At the time I handled licensing for Steve Jackson Games. "You should talk to Bungie," said Jack. So I did. They were open-minded, interested, and fast-moving, so in short order we had a license.

Now the trick would be to publish quickly. Computer games don't spend a long time in the public eye; the next big thing always lurks just around the corner. We wanted to have GURPS Myth out in time for this Christmas, which meant finding a writer who knew GURPS, knew Myth, and works incredibly quickly.

I knew a guy who fit the bill. 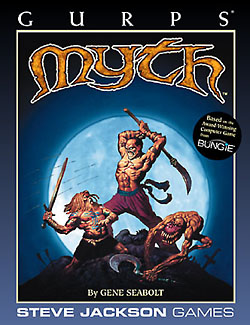 Mr. Mom Fires Up the Spreadsheets

The beginning of the 1999-2000 school year changed my personal circumstances a few months after I finished up the Bungie license. My wife had received a promotion, my son was beginning kindergarten, and these circumstances forced me out of day-to-day administration in the SJ Games office and into editing from the house. Editing, and one writing project: GURPS Myth.

The first step was a doozy. Not a lot of writing could get done until I figured out a conversion formula from Myth to GURPS. That was the meat of my concept for the book; the racial templates in GURPS Myth wouldn't just be conceptually identical to their Myth origins, they would be nearly precise conversions, at least relative to all the other writeups in the book.

Now, "nearly precise" can mean "anything short of just making it up" in some minds, but I did come up with a not-too-complicated conversion formula that produced viable GURPS characters. In doing so, I had to mix lots of apples and oranges, which I enjoyed a whole lot more than did Grandmaster of the GURPS Editors Guild Sean Punch when he looked them over. Many of the conversion statistics mix elements that are unrelated at first glance; the most similar GURPS example might be the mass-combat system, which mixes defensive, offensive, and maneuver capability into a single TS value. This pretty much guarantees that traditional GURPS dynamics will fly out the window in a conversion to the Myth game, but that's OK. All those DX-pumped, cheating-on-HT warriors were getting a little cookie-cutterish, anyway.

Speaking of the Herr Dr. Kromm himself, you can blame him for the book making its deadline with room to spare. When I asked him to give the first draft a conceptual once-over, he instead sent back minutely detailed corrections (partly because I worded my request too vaguely, partly because I asked the tiger to eat half the steak). This shaved untold hours off my own work, so he didn't hear me complaining, nor will you. When it comes to debugging GURPS mechanics -- and this book is chock full of detailed, get-out-both-the-Compendia mechanics -- it's a lot more fun to sit back and watch the master work.

Every large project features at least one curveball, some problem from out of the blue that no one involved foresaw. GURPS Writer-Without-Peer David Pulver had the honor of throwing out the pitch for GURPS Myth. A few days after SJ Games announced the license, he nonchalantly commented on a Pyramid message board to the effect of, "At least we'll have to deal with archmagery now."

Ouch. I hadn't thought of that. Myth features a variety of wizards popping off monstrous fireballs for as long as it takes to cauterize all comers. The GURPS magic system would have to rev it up.

When one thinks GURPS and archmagery, those with any taste immediately think of S. John Ross' excellent umana system. So did I, of course, but in consultation with Sean he pointed out that he already had introduced one element of what I needed in GURPS Wizards: the extended Magery rules. Really, the only thing lacking was some advantage to do an end-run around the fatigue rules, and a backstory to tie it all together. Those parts I added; you can judge for yourselves the results.

Designer's Notes articles traditionally feature some outtake from the book that they represent. I didn't want to disappoint here, even though GURPS Myth didn't leave out anything worth featuring. One thing it didn't address, though, was game statistics for specific major NPCs, respecting Sean's preference that these characters remain vague and therefore menacing to player characters. That makes the following very much unofficial, but no less threatening for it . . .

A towering Dark Lord who appears to have once been human, with the lower half of his face peeled off and a large, crooked scar over where his heart should be.

Equipment: Soulblighter carries a fine glaive in combat, doing damage of 5d+1 cutting or 3d+1 impaling. He needs no time to ready it between strokes. Presumably he carries a set of runestones concealed on his person. He usually will do just as well with mock runestones as the genuine articles, since the penalty to his Activate Runes skill using two mock stones will lower it only to the effective skill of 11 already mandated by his Rune-Lore skill.

Jack and I did, finally, play Myth II head to head on precisely one occasion, addressing the original reason I became interested in the game. He waxed me thoroughly.

Copyright © 1999 by Steve Jackson Games. All rights reserved. Pyramid subscribers are permitted to read this article online, or download it and print out a single hardcopy for personal use. Copying this text to any other online system or BBS, or making more than one hardcopy, is strictly prohibited. So please don't. And if you encounter copies of this article elsewhere on the web, please report it to webmaster@sjgames.com.